The Women’s Suffrage Movement in Edinburgh 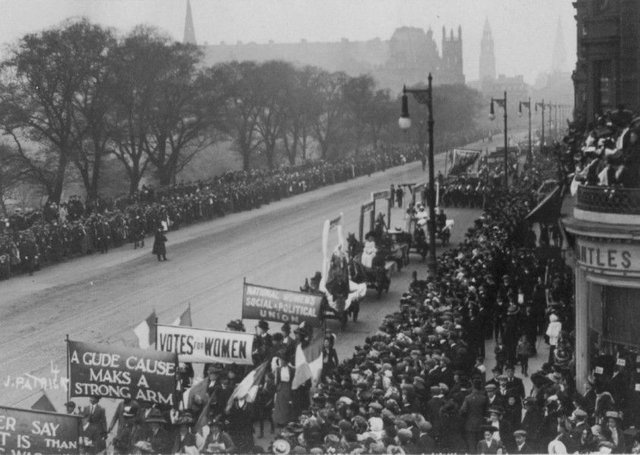 The Women’s Suffrage Movement was the campaign for women to have the right to vote. The campaign started after the rejection of an amendment to the Parliamentary Reform Act that John Stuart Mill MP proposed in 1867. Women’s suffrage societies established across the U.K, including Edinburgh. This women’s history month, explore this interesting history of the women’s suffrage movement in Edinburgh.

The Edinburgh National Society for Women’s Suffrage was the first women’s suffrage society to be formed in Scotland. This put Edinburgh at the centre of the movement’s emergence in the country. Their campaigning aimed for “no taxation without representation”. This meant they wanted women to have the right to vote based on the same qualifications as men.

Early members of the society included Priscilla Bright McLaren, Agnes McLaren, Eliza Wigham and Flora and Louisa Stevenson. Several of the women were already familiar with campaigning. For example, Wigham played an important role in the abolitionist movement.

They worked closely with male supporters to have petitions presented to MPs and other politicians. They also networked in the Liberal political circles of both Edinburgh and London. While they may have been an Edinburgh-based society, they collaborated with similar organisations across the country to work at a national level.

There was at least one woman who was ahead of her time in terms of voting: Mary King. Her husband left her the title of Burgess in his will. It meant she had a seat on the Edinburgh Council after he died in 1629, granting her voting rights. This was three hundred years before the right to vote on equal terms as men was granted to women.

There’s two main groups associated with the women’s suffrage movement in the U.K: the “Suffragettes” and the “Suffragists”. The Suffragists focused on peaceful methods, such as leafleting and petitioning. The Suffragettes were famous for their attention-grabbing militant tactics. Both existed in Edinburgh. Arabella and Muriel Scott joined the Edinburgh National Society for Women’s Suffrage while they were students in the city. The sisters were both Suffragettes who went on hunger strike while in prison. This common response of Suffragettes to prison sentences meant many suffered forced-feeding, including the sisters.

Public meetings started in Edinburgh and attracted large numbers. Newspapers initially claimed that women had no interest in voting. However, they started to cover the meetings in detail.

The Edinburgh society travelled around the country to speak. London-based campaigners also travelled to Edinburgh to give lectures, such as Millicent Fawcett. Jane Taylour’s 1873 lecture argued that in a country ruled by a Queen, women should be able to vote on the same basis as men.

Women who met certain qualifications, such as owning property, were granted the vote with the 1918 Representation of the People Act.

Many societies campaigned for there to be such qualifications on who could vote and they disbanded when this was introduced. The Edinburgh society renamed as the National Union of Women for Equal Citizenship. However, only around two-thirds of women met the requirements. The campaign focused on granting women the right to vote on the same qualifications as men and the new law did not guarantee this. The law expanded the franchise to include all men over the age of twenty-one.

The Equal Franchise Act 1928 finally granted all women over the age of twenty-one the vote.

To hear this story and learn about other remarkable women, join us this Women’s History Month for our (Her)story tours. Find out more here