Edinburgh’s Old Town and New Town: what is the difference? 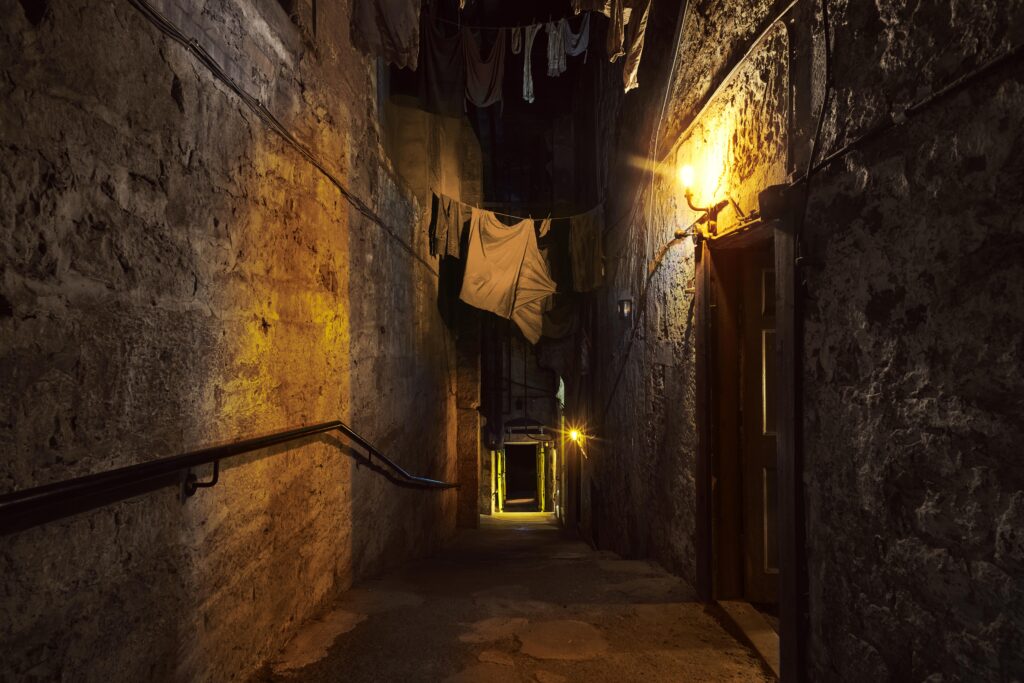 During visits to the city you have likely passed through Edinburgh’s Old Town and the New Town. You might have even wondered why the areas look so different, despite being so close to each other. The answer lies in their history.

Edinburgh built up around the castle and expanded east, becoming the most populated place in Scotland by the 17th century. Most of the city was a labyrinth of narrow alleys, called “closes”. The closes typically were named after influential people or the businesses located there (for example, if you wanted to consult a lawyer, you would have gone to Advocate’s Close) Find out more about the inspiration behind Edinburgh’s street names here.

There was a huge problem with overcrowding and poor hygiene, creating a disgusting smell. Without sanitation systems, people would just throw waste into the street. Struggling to imagine this? Check out our TikTok. Since most of the closes sloped, the waste ran down. So many people living on the small amount of land produced a lot of smoke. This inspired Edinburgh’s nickname “Auld Reekie”.

At night, crime was common. In 1554 the Burgh Council introduced a regulation that those who had to be out at night carried a lantern or other light source and all street lamps had to be lit during the night.

So many people living on such a small stretch of land meant that buildings grew upwards, often by as many as eight storeys. Society organised vertically, meaning the poorest lived at the bottom closest to the filth, while the rich lived above it at the top. For most people, life expectancy was short and outbreaks of disease were common.

By the 1750s, a lot of the buildings around Mary King’s Close were in a horrific state. Decades of political and economic upheaval combined with the pressures of overcrowding had taken its toll. The dirty conditions of the Old Town’s closes disgusted the richer residents, who started to literally distance themselves from it by moving away. Initially they moved further east to more exclusive environments, such as Canongate. Then, in the late 18th century, there was a new opportunity – for those who could afford it – to live in better conditions: a purpose-built new town.

In the 1760s, development on the New Town started. This area of the city is visibly different from the Old Town. The New Town’s buildings are typical of the Georgian era and neo-classical architecture. The New Town’s street names took inspiration from the current monarch, King George III. This inspired the likes of George Street and Hanover Street. Businesses abandoned the Old Town and the opportunity to live in less crowded conditions convinced many families to migrate. Princes Street and George Street became commercial and shopping centres, especially with the introduction of railways in the 19th century.

While the New Town thrived, the Old Town suffered. In Allan’s Close, signs of poverty are visible. As the buildings deteriorated, residents abandoned them and they were built over. This is why the streets and houses remain so well-preserved, making them a fascinating look at how people lived centuries ago.

This explains why Edinburgh’s Old Town and New Town look completely different from each other.

Step down into Edinburgh’s hidden history and explore a labyrinth of well-preserved 17th century alleys and houses during a guided tour of The Real Mary King’s Close. Hear the stories of former residents and see how people lived in the closes of the Old Town. Book your tickets now