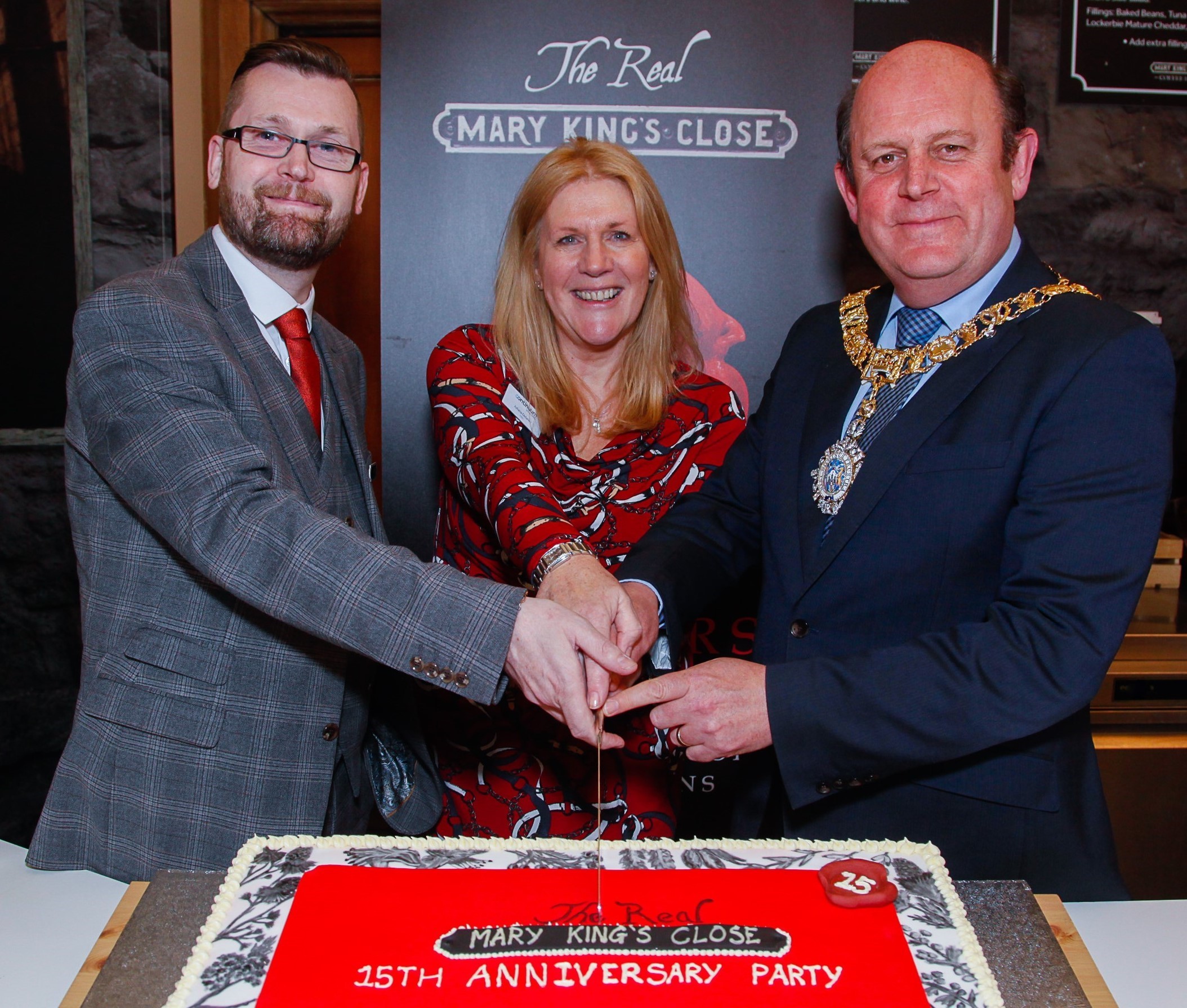 We are delighted to be celebrating a major milestone this year, as we commemorate the 15th anniversary of The Real Mary King’s Close.

To mark the occasion, we hosted a party for the movers and shakers of the Edinburgh tourism industry. The event saw the launch of several exciting new experiences, including new character guide ‘The Doctor’, a Mary Queen of Scots themed room, and a renovated outdoor courtyard area.

Frank Ross, Lord Provost of Edinburgh, commented: “For 15 years, the Real Mary Kings Close has educated and enthralled citizens and visitors with its social history tour of underground Edinburgh.

Before the attraction opened in 2003, its warren of streets and spaces lay frozen in time for many years, right beneath our feet. Now, over 2.75 million people have discovered this hidden part of Edinburgh’s history, while the site has expanded to include an above-ground exhibition space and entrance on to the Royal Mile, as well as a retail and café area.

This new display telling the story of the night Mary Queen of Scots spent on the Close is another fantastic addition for the attraction in this anniversary year. It is testament to Continuum Attractions and its approach to telling the city’s stories in new ways that The Real Mary Kings Close has consistently remained a five-star visitor attraction, and one of the most popular in the whole of Edinburgh.”

Juliana Delaney, CEO of Continuum Attractions, commented: “This place is very, very special. The real stories of real lives lived in these spaces is even more so.

It was, and remains a privilege to reveal these amazing stories in such a memorable place and provide a 5-star experience for tourists and Edinburgh locals alike. The Real Mary King’s Close is the real deal.  It is an outstanding visit which creates memories that last. Its commercial operation has provided both a top-class attraction for the city, and revenue for the city coffers too.”

Craig Miller, General Manager at The Real Mary King’s Close, commented: “Reaching our 15 year milestone is a significant landmark, and a testament to the unique and authentic experiences we offer here at The Real Mary King’s Close. We are looking forward to the year ahead, and welcoming existing, and new customers alike to discover the Close like never before. 2018 will be a year of progress, and celebration.”

Originally opening in the spring of 2003, the unique five star tour experience has welcomed over two and a half million visitors, and consistently ranks among the top things to see and do in Edinburgh. In the year 2017-2018 the attraction hosted 250,000 guests; the busiest year yet for the Close, and an 11% increase on the previous year’s visitor numbers.

Working closely with the City of Edinburgh Council, Continuum Attractions was chosen to develop and operate the historic site as a world class visitor attraction, revealing the real history of these narrow streets and spaces to guests from all over the world.